ƒlirp, the title of this project produced for CAR, plays with quirky web2.0 naming conventions. In fact, ƒlirp is an acronym for exactly what it is – a ‘fast loop image recycling process’.

There are two sides to the ƒlirp coin: it is simultaneously a ‘cinema house’, it’s own interactive, mobile, green, micro movie house; and, ‘House’ cinema: the plot, rural homes for sale or in repossession due to the current mortage malaise in America; the ‘fabula’, a narrative conjured in the minds of audience members while interacting with ƒlirp’s solar-battery-driven Organic-LED responsive screens. It has been said of art cinema that the movie exists in the cut, the space between the frames. In ƒlirp, that could not be more apparent, extending this notion to include the interactive space between spectator and screen.

Creating and installing a tiny multi-screen cinema house for this event, not much larger than a few cell phones, ƒlirp senses the presence of spectators. In turn, their proximity edits the screen contents, a ‘House cinema’ story unfolds, juxtaposing insides and outsides of homes on the New Depression Era skid, encouraging the spectator to imagine or project human stories into these settings.

ƒlirp recycles user-generated real estate and home repossession images from the web, primarily homes and former homes on the American Prairies, harkening back to 1930s Dust Bowl Depression Era, which along with current blog and net news media, catalyzes story-creation in the mind of the observer in front of miniature responsive screens. ƒlirp also appeals to concerned media artists and culture producers to embrace sustainable and recyclable energy sources. For ƒlirp’s power needs, the sun is enough. Its light powers both ƒlirp’s ‘cinema house’ while empowering its ‘House cinema’ audience. 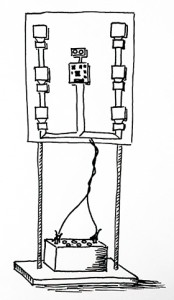