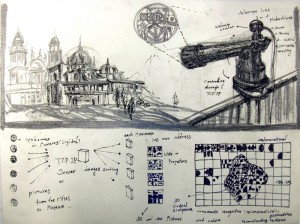 Description: Most often, the art process ends with the spectator, a work of art is completed by an ‘act of looking’ [ref: Duchamp, “The Creative Act” 1957.] In this regard, ALand begins with an ‘act of looking’, allowing biannual guests to view details of other works in the exhibition through a telescope installed for the purpose on the periphery of a main exhibiton hall near the entrance to the show. These telescope images captured by biannual visitors trigger a Web2 search for other user-generated-images produced around contemporary Andalusia. The search uses computer vision; pattern and face recognition, color and other visual characteristics. This ‘picture looking at pictures’ scenario produces a set of images for dislay on a matrix of small LCD screens, the type commonly used in cellphones. The matrix or mosaic of LCD images produced by the guest’s act of looking through the exhibition telescopeis to be found at the other end of the show, and in real time as new viewers look at the show from its beginning, new sets of andalusian-user-generated-images appear on the screens installed near the exhbitions’concluding space. 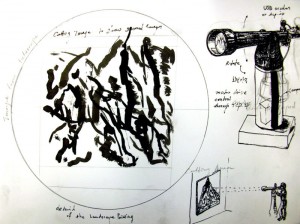 link to installation: Museum guest and user-generated content produced by the telescope is sent up to Second Life. The images produce in this sense the island’s ‘event architecture’. The events that take place in ALand Second Life are aesthetically free mutations of two famous literary and philosophical works from the period Al-Andalus: – ‘The Conference of Birds’ 12th C. by the Persian Farid ud-Din Attar; – ‘Alive, Son of Awake’ a philosophical novel by 12th C. Andalusian philosopher Ibn Tufayl. 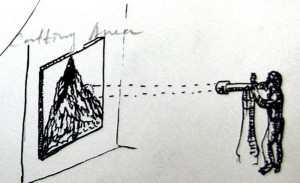